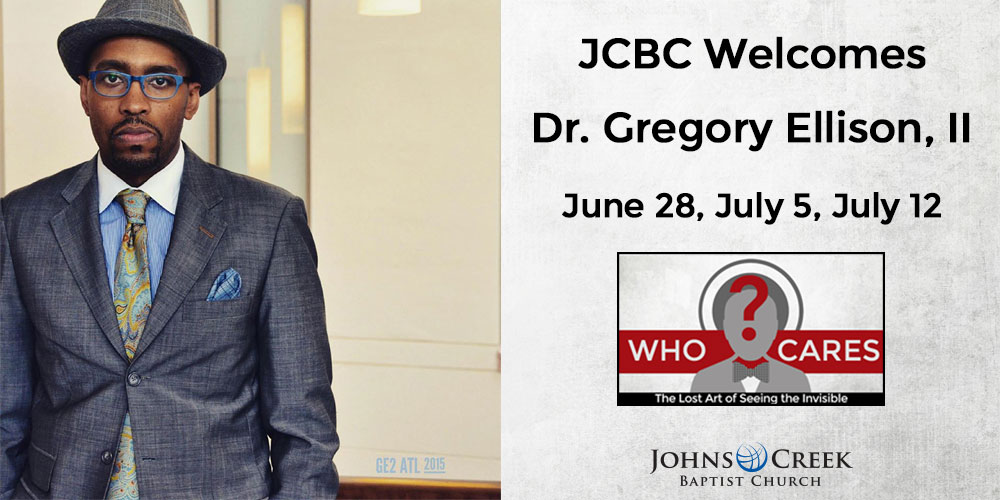 As you may know, I am currently working on my doctorate at Mercer’s McAfee School of Theology. As a part of the program, students will spend three weeks in the summer immersed in an intensive seminar. That three-week period (which began this week) will mark the end of the first year of my doctoral studies.

During these three weeks, I am very excited to introduce you to a friend and colleague of mine on Sunday mornings. Dr. Gregory Ellison II is professor of pastoral care at Emory’s Candler School of Theology. While I will be with you each Sunday, leading in worship, I have asked Dr. Ellison to prepare a mini-series of messages that will encourage and inspire us all. His messages, which are part of our ongoing Summer Church emphasis will be entitled, “Who Cares: The Lost Art of Seeing the Invisible.”

Here is a bit more background information on our special guest:
Ellison is a product of the Atlanta Public School System and a proud alumnus of Frederick Douglass High School. On May 10, 1999, he received a Bachelor of Arts degree from Emory University, where he was inducted into the Emory College Hall of Fame; the first black male bestowed with that honor. Gregory continued his educational journey at Princeton Theological Seminary as a Presidential Scholar where he received his Master of Divinity degree and Ph.D. in Pastoral Theology.   Ten years after graduating, he returned to Emory to join the faculty of Candler School of Theology. He is currently an associate professor of pastoral care and counseling. In his second year of teaching at Candler, Gregory was awarded Faculty Person of the Year (2010-2011). Three years later Gregory received the Emory Williams Distinguished Teaching Award, Emory University’s most prestigious faculty teaching honor. He is author of Cut Dead But Still Alive: Caring for African American Young Men, and an ordained Baptist minister who has served on the ministerial staffs at both Methodist and Presbyterian churches.

In 2013, Ellison and a team of colleagues founded Fearless DialoguesÔ a grassroots initiative committed to creating spaces for unlikely partners to engage in hard, heartfelt conversations that see gifts in others, hear value in each others’ stories, and work for change and transformation in self and other. In nearly two years, Fearless DialoguesÔ has traveled to over twenty cities domestically and internationally and gathered nearly 5,000 unlikely partners at churches, universities, and public schools.

Gregory cherishes most the strong convictions he holds toward family, fraternity brothers (of Kappa Alpha Psi) and friends. On June 14, 2003, he was married to Antoinette Greenaway-Ellison and is the proud father of Elisha Alexander, Gregory III, and Anaya.

I hope you will join me this Sunday, as we welcome Dr. Ellison in worship.