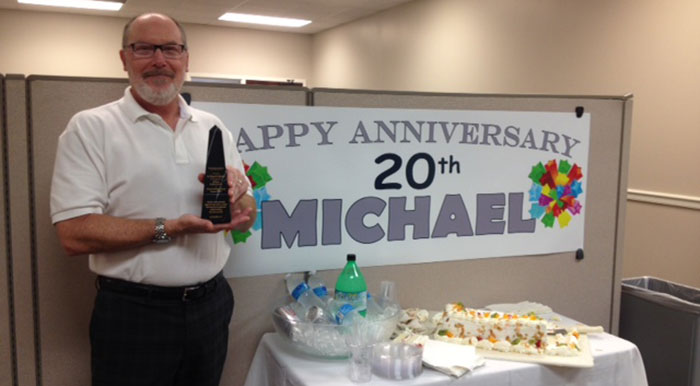 This past Sunday marked an important milestone in the life of our church.
We observed the 20th anniversary of the ministry of Dr. Michael McCullar. Now in his third decade of service with Johns Creek Baptist, Michael has served our congregation faithfully in significant ways over these many years.

Michael was called to JCBC as Minister of Education in September of 1994, just one month shy of the church’s first anniversary. He served in that capacity for three years, working with staff and lay leaders to reorganize the Sunday School and the overall education program of the church.

As the area continued to explode with new growth, and church membership swelled with new life, Michael transitioned to serve as Executive Pastor. He would minister for the next 15 years in that role, serving a wide array of administrative and organizational needs within the congregation.

Then, a little more than a year ago, as the JCBC ministry strategy was reorganized for greatest effectiveness and mission, Michael transitioned again to serve in the role of Formations Pastor, overseeing the division of the church responsible for spiritual formation, education and Christian discipleship.

In addition to the official roles Michael has fulfilled during his tenure, his personal passion for Missions has lead Johns Creek Baptist for many years to continue exploring new ways to be the hands and feet of Christ all around the globe. Even as you read this blog, Michael prepares to lead another team of JCBC missionaries, to the Dominican Republic, where the crew will build the infrastructure to a clean water system that JCBC funded through our annual missions offering.

It is because of his devotion to Christ, and his love for this church that Michael has served faithfully, these past 20 years. In a world where the average tenure of a Senior Pastor is 4 years, and staff pastors even less than that, we are blessed beyond expression in our congregation, to have enjoyed several long-tenured ministers. That kind of longevity and ministerial perseverance is a rare and precious gift to the church and to the Kingdom of God.

Speaking personally, I am grateful to have Michael on my team, to partner with him in the work of the Gospel, and mostly, to call him friend.

Congratulations on 20 years of faithful service!