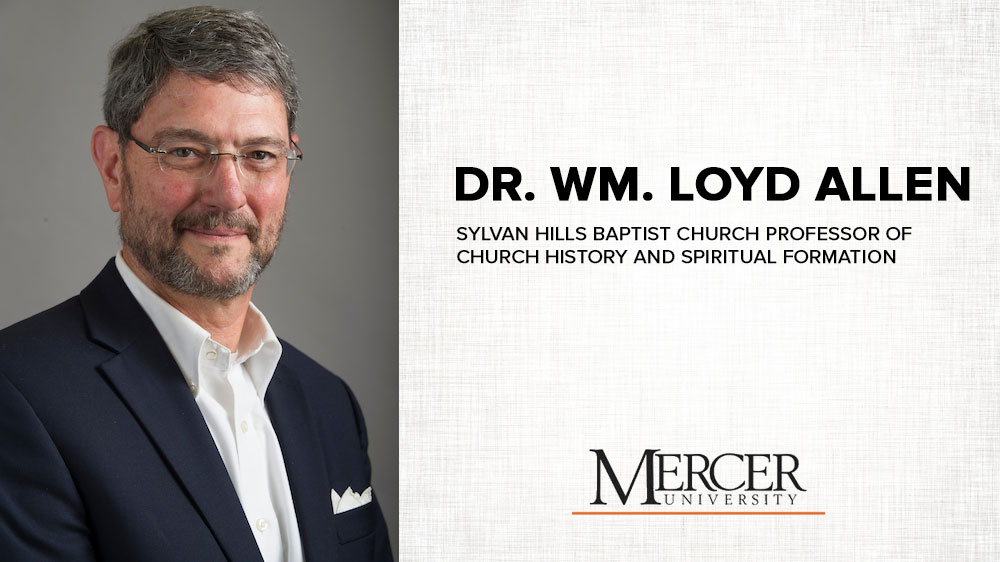 Dr. Allen holds the Sylvan Hills Chair of Baptist Heritage and is Professor of Church History and Spiritual Formation at McAfee. He received his B.S (1974) with a double-major in psychology and sociology from the University of Montevallo in Alabama. His training for Christian ministry took place at the Southern Baptist Theological Seminary in Louisville, Kentucky, which awarded him the M.Div. (1978) and Ph.D. (1984) degrees. During his years as a student, he worked as an aide on a psychiatric ward, did one unit of Clinical Pastoral Education as a chaplain in the emergency room of an urban hospital and another in the admitting ward of a state mental hospital. He also served as the ecumenical campus minister at a Roman Catholic college and held a seven-year pastorate at a rural church.

After graduation, Dr. Allen took a job as religion professor and campus minister at Brewton-Parker College in South Georgia for five years before moving back to Louisville for three years on the church history faculty of Southern Seminary.  In 1992, Mississippi College called him to become the head of its Christianity department. He left Mississippi after three years to become professor of church history and spiritual formation on the founding faculty of the McAfee School of Theology. He feels fortunate to teach at a school of theology with that balances determination to achieve academic excellence and desire to support the ministries of the local church. Dr. Allen teaches in the areas of church history, Baptist heritage, and spirituality.

In 2000, Dr. Allen spent ten months reading in Celtic Christianity while on sabbatical at South Wales Baptist College. Upon his return, he was named to the Sylvan Hills Baptist Church Chair of Baptist Heritage. Baptist heritage, Christian spirituality, and interfaith work are his main areas of interest. He has published a history of Maryland/Delaware Baptists and another book, Crossroads in Christian Growth, about faith development in crises.  A quick internet search of the numerous journal articles Dr. Allen has published will reveal such titles on Baptist heritage as “How Baptists Assessed Hitler” in Christian Century or “’Exquisite Powers’: Ann Baker Graves and Corinthia Read Williams, Obedient Revolutionaries,” in Baptist History and Heritage. Dr. Allen’s spirituality interests appear in articles such as “Intentional Protestant Monastic Communities,” in One in Christ, “Thomas Merton and E. Glenn Hinson: The Aggiornamento of Spiritual Formation among Progressive Baptists,” in The Merton Seasonal, and “The Spirituality of Adoniram and Ann Judson” in Perspectives in Religious Studies.  In interfaith work, upon being inducted into the MLK Jr. Collegium of Scholars at Morehouse College, Dr. Allen delivered a lecture titled “The Meeting of Saint and Sultan: The Symbolic Power for Peace in the Personal Encounter between Saint Francis of Assisi and Sultan Al-Kamil of Egypt.” He is currently working on a brief history of Christian spirituality and a comparison of spiritual formation in various religious traditions.

Off campus, Dr. Allen is a frequent faculty member for the Academy of Spiritual Formation and was the Executive Director of the W. H. Whitsitt Baptist Heritage Society for over a decade. He is also a spiritual director and regularly guides pilgrimages to Celtic lands and Israel.

Dr. Allen’s personal life revolves around his family and church. His wife, Libby, works at Mercer’s Baugh Center for Baptist Leadership. His daughter, Clare, a recent graduate of Mercer University, plans a career in social work. At Parkway Baptist Church in the Atlanta suburb of Duluth, Dr. Allen teaches a popular Bible study on Sunday mornings. Libby serves Parkway as a deacon. For relaxation he enjoys reading novels, watching movies, playing tennis, and taking road trips in his Mazda MX-5 roadster.  Whenever they can, he and Libby head for the woods to hike, which may be a pleasure rising from Dr. Allen’s childhood in rural Cuba, Alabama.