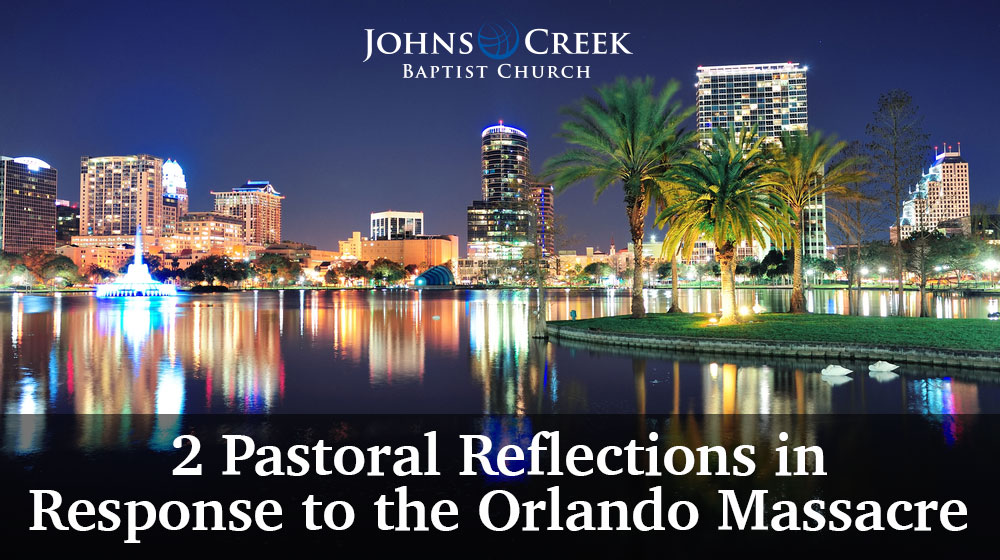 2 Pastoral Reflections in Response to the Orlando Massacre

“‘The City Beautiful’ has now become covered in blood.”

These were the words spoken to me by my friend David Harding, on the phone early Sunday morning. David is the CBF Field Personnel to Ethiopia, a former church member of mine in Orlando, and a close personal friend.

I had called to speak with him about our next clean water and sustainable living project in Ethiopia that morning. It was just a few hours after the last casings of bullets fell at Pulse, an LGBTQ Night Club in Orlando.

In the days that have followed, I have struggled to wrap my mind around yet another mass shooting, and to such a large scale. I have struggled even more to find words that might in any way address (or at least frame) this most recent surge of suffering, fueled by fear and hate.

Out of the broken heart of this pastor, I offer two reflections in response.

1. The Church must find its tears, and weep with the LGBTQ community.

To be clear, followers of Jesus Christ are called to stand in compassionate solidarity with all persons and all peoples who suffer. Anywhere. Anytime. Period.

This truth is at the heart of what we call the incarnation. We say we believe in a God who “became flesh and dwelt among us” (John 1:14). Our very salvation is rooted in the belief that God’s love is most perfectly expressed in the cruciform suffering of Jesus. It is there, in the groaning anguish of human suffering, that Divine Love demonstrates its redemptive power. Christians, above all others, should be the first to understand the significance of standing in solidarity with those who suffer. “For God has demonstrated God’s love for us in this, that while we were yet sinners, Christ died for us” (Romans 5:8).

But this bedrock belief that we affirm in general, must be mobilized in particular, when it comes to the mass shooting at Pulse Night Club in Orlando. Members of the LGBTQ community were deliberately targeted for extermination. And now, 49 families are reeling in pain. Fifty-three more who were injured struggle to heal physically, while a whole community is jilted by the awareness of the temporal (yet visceral) powers of hate.

Now is the time for the church to be present.

Now is the time to prove our love is more than words.

Now is the time to demonstrate the redemptive power of God’s love, through genuine and humble expressions of empathy, sorrow, and uncondemning love.

Now is the time to embrace those who weep, and with tears in our own eyes, offer only this: “If Christ be in us, then his arms are around you now.”

2. The Church must rehearse a better narrative than the predictable scripts of cable news.

Tragically, with each new mass shooting, there is a script that has become all-too-familiar.  And clearly, the script is well-known, because we’ve had some time to rehearse.

First, there is the shooting.

Then, a scrambling for information: news trucks and media outlets racing to scoop the headlines.

Then come the posts on social media. The tweets. The hash-tags. The change of profile pictures. The #PrayFor(fill in the latest city…).

All, well-intended.
But painfully predictable.

Then, before the yellow crime scene tape secures a perimeter, the narratives begin. The various camps pitch their tents, and stand their ground behind their politician or candidate of choice, who waxes on about who’s to blame and how he or she understands the situation best, and has the better plan to prevent it in the future.

All the while, what is easy to overlook is the actual human suffering endured by the families of the victims whose lives (in an instant) are changed forever.

The sobering reality about this kind of narrative is that the Orlando shooting (much like the others before it) will soon become the 4th or 5th item in the news cycle.

It just will.
It will be buried in bullet points, and in some cases before the last of the victims themselves are laid to rest.

The church must rehearse a better narrative.
Why? Because we can.

At the core of our faith is the belief that “in all things God is working for good…” (Romans 8:28). Even in the most horrific ordeal, we believe in the palpable presence of a loving God. Our experience has taught us that there really is an “ever-present help in time of trouble” (Psalm 46:1) relentlessly working to bring about good, so that even in the face of abject suffering and despair, it becomes possible to hope.

I have made many phone calls this week to friends in Orlando. The church I served before Johns Creek was in the heart of Orlando: College Park Baptist Church. They have changed their name since. They are now known as “Church on the Drive.” One of the many reasons they chose the change in name was to communicate their desire to be always prepared to mobilize love wherever it is needed most.

In the aftermath of the shootings this week, they have lived up to their new name. Immediately, they opened their doors, gathering their community for prayer. They have responded to the needs of police officers and other emergency personnel by creating care packets to serve the needs of those who are working extended days and nights, caring for the needs of the victims’ families.

In phone conversations with members, I have learned of other agencies in the city working together like never before. Hospitals collaborating to share resources, neighbors standing in line to donate blood, and people of ALL faiths gathering in rallies and vigils, to lift up and honor a force more powerful than death: Love.

Yes, I believe I read that somewhere…
“Love is patient; love is kind; love is not envious or boastful or arrogant or rude.
It does not insist on its own way; it is not irritable or resentful;
it does not rejoice in wrongdoing, but rejoices in the truth.
It bears all things, believes all things, hopes all things, endures all things.
Love never ends.” (1 Corinthians 13: 4-8)