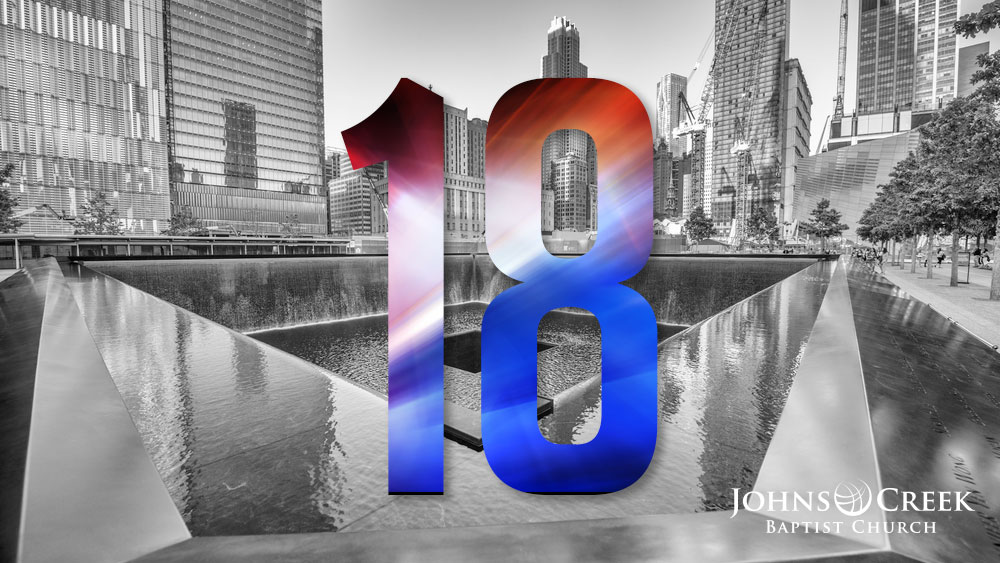 In those days, Laura worked in the morning, and I went into the office late.
We were living in Gaithersburg, Maryland—just outside Washington, D.C.

I was changing a diaper on our bed when the second plane hit.
As I watched, little did I know (little could I know) that this would be the last diaper of its kind.
From that moment forward, every child born would grow up in a world re-defined.

In fact, children born AFTER 9/11 are now old enough to enlist and serve in the war it incited.
Take a moment to reflect on that haunting thought.

It’s been 18 years.
Our 18-year-old has now moved into college.
In our culture, we think of 18 as a launch into the adult world—a “coming of age”.

As the babies of 9/11 now begin to take new “first steps” into adulting, it has me curious.
How have we done in raising a generation tasked with repairing the world?

This is what we are called to do as disciples of Christ.
We have not only been given the gift of reconciliation with God, but we have been charged (BY God) with the “ministry of reconciliation” (2 Corinthians 5:19).

Henri Nouwen famously coined the phrase “wounded healer.”
I think of that image when I consider a people jilted by the events of 9/11, but nevertheless entrusted by our Lord with the daunting task of raising children who will be the peacemakers of this age.

That is my prayer on this 18th anniversary of that dreadful morning—that we might remember the families of the fallen that day, the sacrifice of those serving in the aftermath of war, AND that in faithfulness to the example of Christ himself, we might become wounded healers of this broken world…called (and capable) to forgive the debtor, love the neighbor and enemy alike, and pray for any who would do us harm.

On this day, may the Grace and Peace of our Lord Jesus Christ be yours.

Have I told you lately how much I love being your pastor?
Well, I do.
Shaun