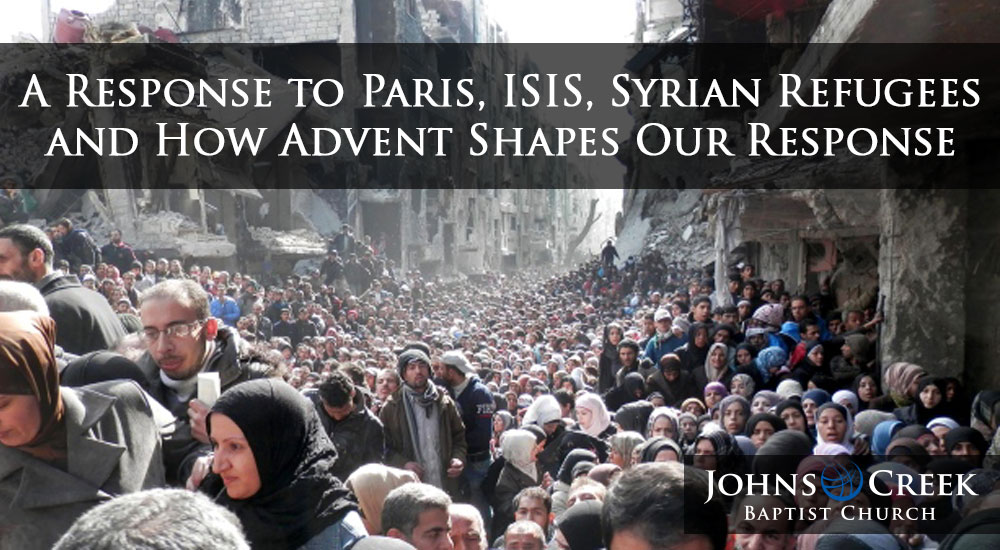 A Response to Paris, ISIS, Syrian Refugees and How Advent Shapes Our Response

While in England on study leave, I had a happenstance encounter with a fellow Rotarian who recently retired from a Church of Scotland role in outreach to Islam. We chatted about my work before the Rotary meeting and he asked me if I’d heard of the Muslim-Christian Study Centre’s work, which I had not, and he told me he would give them a call and see if it would be possible for me to drop by to meet the faculty. I did not expect to hear from them as on the scale of visiting academics in Oxford I would rank as a 0.05 on the classic 10 point scale. They did contact me, which suggested to me this was providential to our church’s missional ministry, and we set a date for me to attend a lecture and a dialogue session between Muslim and Christian professors and writers, the following week. Two days later ISIS attacked Paris, and the tenor and tone of Western Europe changed radically, as did the agenda for the dialogue session at the Centre.

In both Wednesday sessions, I will speak to my experiences with this amazingly progressive and gutsy collective of Muslim and Christian academics, students, and writers who are seeking to bring dialogue, to find commonalities between the three largest world religions, and to the extent possible, seek a peaceful solution to the raging Islamic extremism from within Islam itself. While I will always disagree with Islam on who Jesus is, and the genuineness of the Bible, I refuse to paint all Muslims with the broad brush of extremism. That, thus, also builds my views on Syrian refugees and what the Christian response should be based on scripture. Believe it or not, ISIS made a mistake in attacking Paris this close to Advent. They had distinct reasons, and we will discuss those today and tonight, and we will lay out how Advent must inform our response as believers. Please remember: coalitions and countries do what coalitions and countries must do to protect their citizens and interests. If that involves bombing then it involves bombing; but, bombs alone will not solve the problem of violence in the name of religion, Islam or otherwise. The Faith Community also has distinct roles to fulfill in this worldwide mess. Join me for this challenging session, or drop by and let’s chat.