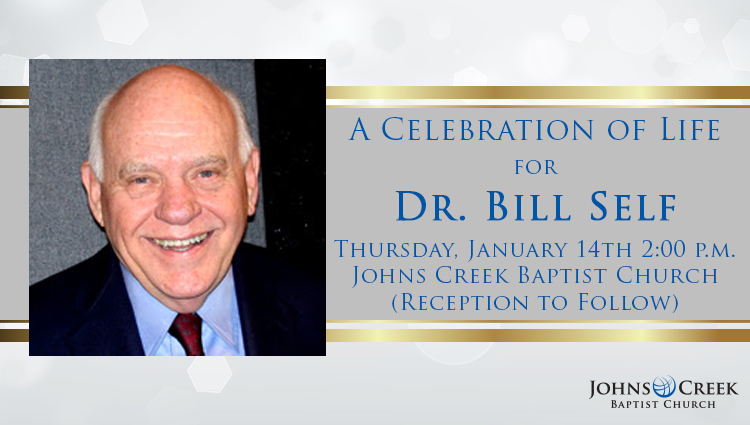 Obituary for Dr. Bill Self

Dr. Self served as Senior Pastor of Johns Creek Baptist Church from 1991to 2012. Previously he pastored the Wieuca Road Baptist Church from 1964 to 1990. More recently, he taught at Mercer University’s McAfee School of Theology, where the William L. Self Lecture Series was established in his honor. Additionally, he served as chairman of Day 1 radio ministries, and served on the Board of Trustees of Mercer University.

He served as special envoy at the inauguration of William Tolbert as President of Liberia, and also was invited to the Republic of Korea to negotiate religious liberty issues. In addition, he was invited by the government of the Republic of China to visit Taiwan, during which he met with the president of Taiwan.

His most recent book, “Surviving the Stained Glass Jungle” is about his years as a pastor.

He is survived by his wife, Carolyn Shealy Self; his children Lee Self and wife Birgit Voss; Bryan Self and wife Karen Self; grandsons Benjamin and Carter Self; sister Susan Walton; and niece Joanna Gresham and husband Scott.

A memorial service will be held at Johns Creek Baptist Church on Thursday, January 14, 2016 at 2 pm. Reception to follow.

In lieu of flowers, contributions may be made to the William L. Self Lecture Series of McAfee School of Theology, Mercer University.

Additional information about the life of Bill Self can be found here.