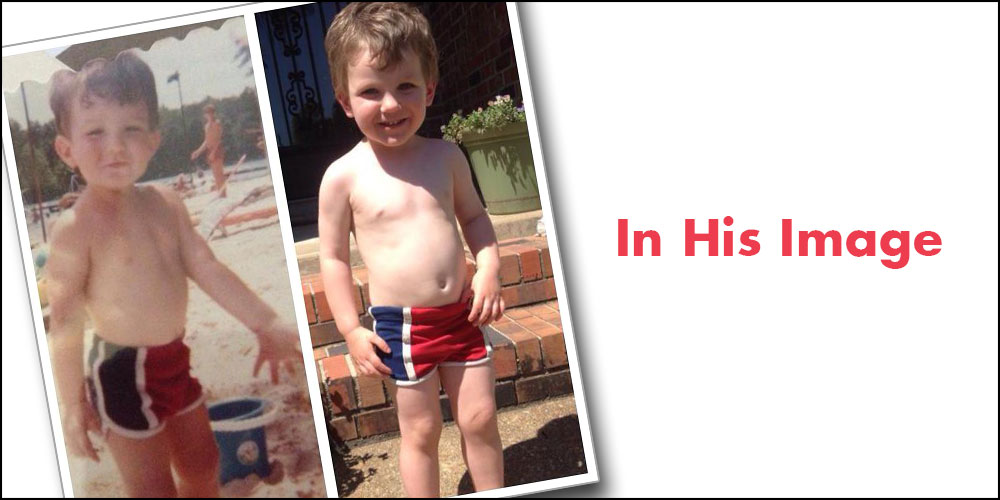 I have an interesting picture. On the right is my grandson, Caleb. On the left is my son-in-law Alan when he was Caleb’s age. They are in the same swim suit. Why Alan’s mom saved that swim suit for 30 years, I don’t know! J But it’s remarkable how much alike they look. If Caleb wants to see what he will look like in 30 years, he just needs to look at his dad! J

You know, the Bible talks about us being made into the image of Christ. Does He look like that picture that was in the Sunday School rooms when you were a kid? Is that what we’ll be like? Of course not. No one knows what Jesus physically looked like and God did that on purpose! But Jesus is described in great detail in the Bible so we can know if we’re “looking like” Him or not.

We know He “loved righteousness” and “hated wickedness.” (Hebrews 1:9) We know He didn’t do anything from selfish ambition or conceit. He was humble. (Phil 2) He set an example of humility by washing the disciples’ feet. He was patient in affliction, He was kind, helped those in need, He loved others so much that He gave Himself sacrificially. His relationship with the Father resulted in action. Action to help others. Actions of grace and mercy. When He was wronged, He didn’t retaliate. He knew who He was and was constantly in touch with the Father.

Does that describe you? Me? No? Well, maybe it’s because God isn’t finished with us yet! 2 Cor 3:18 states that “we are being transformed into [Christ’s} likeness” while Romans 8:29 states that God “predestined [all believers] to be conformed to the likeness of His Son.” Jerry Bridges in The Discipline of Grace says “transformed” refers to the process and “conformed” refers to the finished product.

Caleb doesn’t look like Alan looks now. But give Him a few years. He’ll grow into that image. But along the way, there will be falls, scrapes, maybe a broken arm… He’ll have to learn how to ride a bike, drive a car, study… And it will take years. Years.

Along the way to becoming like Christ, have you had some falls and scrapes? Been broken a few times? Have you had to learn some things along the way? Difficult things? Do you feel like you should be there by now? I know I do. But God is in the process. In the process of making us…transforming us…so that one day, when we are with Him, we will be conformed to His image…we’ll be like Him. Dear friends, now we are children of God, and what we will be has not yet been made known. But we know that when he appears, we shall be like him. (I John 3:2)

When you go to a child’s school to watch them race, when do you start cheering? At the end? No! As soon as the starting gun sounds, you begin shouting “Go! Go! You can do it!” If he or she falls, you don’t quit, you cheer all the more “Get up! Keep going! You’re going to make it!” God sent us His Word to tell us “Go! Go! When you fall, get up! You’re going to make it! I’m here with you! Don’t give up! I love you!”

So let us run with perseverance the race marked out for us. The Message finishes this passage like this Keep your eyes on Jesus, who both began and finished this race we’re in. Study how he did it. Because he never lost sight of where he was headed—that exhilarating finish in and with God—he could put up with anything along the way. (Hebrews 12:1-3)