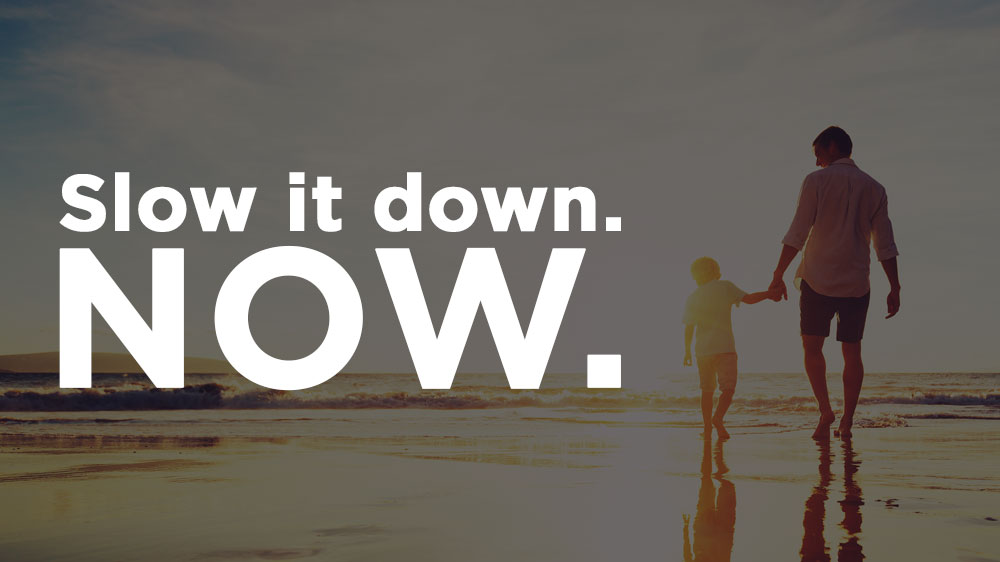 Slow it down. Now.

I couldn’t help but overhear the conversation.

I was in the locker-room, post-workout, and the dialogue between a young father and his four-year-old son had a familiar ring to it.
Eerily so.

“Okay, buddy. Let’s move it along. Remember, the longer you take, the less likely we are to get pizza when we leave.”

Turns out, the son had become fascinated by the numbered locker keys that only come out when you put your member card in the slot. They just dangle there, baiting and waiting on some four-year-old to walk by and marvel.

I silently grimaced a bit.

Everything in me understands right where the father is. I mean, I get it. I really do.
I can’t tell you the number of times I’ve been there.

Watching that moment play out triggered a memory for me.
We were living in Tennessee. Our son, Jackson, was three-years-old.
We were late.

It was one of those days.
No matter what we did, everything seemed to move in slow motion.
We finally got out of the house and were loading the car when, at the worst possible moment—I mean the worst—I look around and cannot find Jackson anywhere.

We were sooo late.
Laura had already called asking where we were. (In other words, I was already in trouble!)

When I found him, he was in another part of the driveway, squatting down, hands folded, fingers interlocked in front of him between his knees…

Me: “Jackson, come on, son!” (Wish I could tell you I was as patient as the Dad I saw in the
locker room, trying to gently motivate him with promises of pizza. I wasn’t.) “I’m not going to
tell you again. Get in the car. We’re already running la—.”

Jackson: “BUT, DADDY LOOK! Come ‘ere! You gotta see this!”

Turns out, the red sucker he had dropped on the ground the day prior (now glistening in the morning sun) was blanketed with hundreds of tiny ants–all in formation to, on, under, and around it. It was too great a sight to ignore, and fully worthy of a three-year-old’s fullest attention.

In our car now, on to some destination I am quite certain was nowhere near as fascinating, I could already feel the weight of regret. There he is, in the back seat, buckled nice and safe…fully restrained. It occurred to me then (even as it occurs to me now) we are made to marvel. We are designed to notice the peculiar things which are just out of the ordinary enough to mystify us. This is why, I suppose, Jesus was so determined to affirm the role of children in the community of faith. They see things we as adults have conditioned ourselves to ignore. That’s why theirs is the Kingdom.

I share this locker-room moment, and my sticky-sucker memory for a reason.
I share it to encourage our young families to slow down.
Slow way, way down.
Now.

I recognize how difficult it must be to fit in all the things that seem necessary. I truly do.
But what if they’re not as necessary as we think.

Dallas Willard said one of the great secrets to the Christian life is this:
“Ruthlessly eliminate hurry from your life.”

As I listened to the young dad in the locker room try to speed things up, I marveled a bit, because I find myself these days trying to slow this train down. Jackson doesn’t stop to look at suckers anymore. (And that’s probably a good thing.) But I’m telling you the truth. That morning with the sucker and the ants and the high-blood pressure…feels like it was last Saturday and not twelve years ago.

Slow it down.
Now.

“This day is fragile. Soon it will end.
And when it has vanished, it will not come again.
So, let us love, with a love pure and true, until this day is through.
(“This Day,” by Point of Grace)

Have I told you lately how much I love being your pastor?
Well, I do.