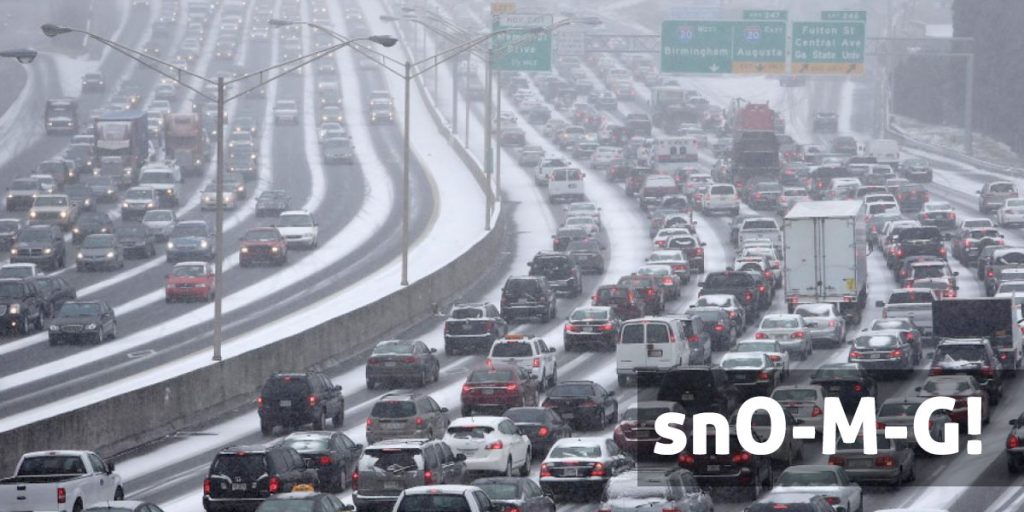 Snowpocalype. Snowmageddon. Snowzilla.
Call it what you will.
But, snO-M-G!!
The past three days have been quite a trip for the ATL.

Thousands stranded in ice and snow.
Hundreds of children (and teachers) sprawled about in classrooms and auditoriums. You know the stats. You’ve been watching too.

But frankly, the greatest gridlock of the past 48 hours has not been at the Downtown Connector, but rather at the jammed intersection of Responsibility and Blame.

Accusations have been made by and about nearly everyone imaginable.
Who’s to blame?
The Governor? The Mayor? The Weather Channel? El Niño?

I mean, seriously. Even while thousands were still stranded and cold, the theme that seemed to dominate the press conference at midday Wednesday was faultfinding.
Finger-pointing.
Blaming.

Don’t get me wrong.
“For everything there is a season, and a time for every matter under heaven.” (Ecclesiastes 3:1) Indeed. Systems, and leaders of systems must constantly review and revise. And where appropriate…later…be held accountable.
Later.

What is striking is how quickly we are prone place blame.
Again: Whether blame is deserved or undeserved is not my point.

My point?
Blame is a bad first step out of a problem.

Doesn’t matter what problem. Snowstorm. Family crisis. Marital gridlock.
When blame is the first move, it creates barriers rather than solutions.

In many ways, blaming not only removes the blamer from taking any responsibility in the situation, it also amplifies an atmosphere of emotional reactivity.
It clouds the room with defensiveness.
It hijacks the conversation and steers it in distracting circles where individuals who are already on edge just keep going round and round and round.

Let’s face it. There is one undeniable fact about the human journey.
Storms come. We slide off road. And sometimes, we get stuck.

But when we do; when we find ourselves in a ditch, cold, and far from anywhere that feels like home, the first and best step is not to evaluate, to accuse, to blame. That may come later, as a healthy step in future prevention.
But later.

The first and best step is to come to grips with this fact…
You are where you are.

In iMAGiNEXT! language, we have said it this way:
Christ meets you right where you are, but loves you too much to leave you there.

What would your faith journey look like; what would your human relationships feel like, if you refused to place blame on others (or even on yourself), but instead sought to let Christ draw you from the place where you are now, to the place
where he is leading you?

There is always a better solution than blame.

If you look closely into the events of the last 2 days, you will hear of reassuring stories; stories of people starting where they were, and moving redemptively forward, from there. Moving forward, not with grief over what could not be done, but rather with decision and action with what could be.

Like the father who walked six miles to his daughter’s school, so he could sleep alongside her.

Or selfless teachers who embraced the situation, and comforted their stranded students through one and in some cases two uncertain nights.

Some businesses opened their doors for the cold and stranded to find shelter.

In one somewhat comical rescue, Hall-of-Famer Chipper Jones personally headed out in the elements by way of 4 Wheeler, to retrieve stranded Braves’ first baseman, Freddie Freeman. You can read about the Twitter-driven rescue here:
http://www.cbssports.com/mlb/eye-on-baseball/24423633/chipper-jones-rescues-freddie-freeman-from-traffic-gridlock

A few of our own JCBC members used social media to offer what they could, like this generous offer from Cecelia Prator:

Or this one from Ivey Hansard:

Now that’s cool.
You start where you are, and let Christ compel you forward from there.

But perhaps nothing is as powerful a statement as the story of Amy Anderson, who gave birth to her daughter, Grace Elizabeth on Tuesday, on the side of the road, in the middle of the storm.

What greater parable could their be? In Christ, there is always the promise that newness and life can be born…and IS being born…right in the moment you feel most stranded.

This is why iMAGINEXT matters.
Because in Christ, there is never not a next!