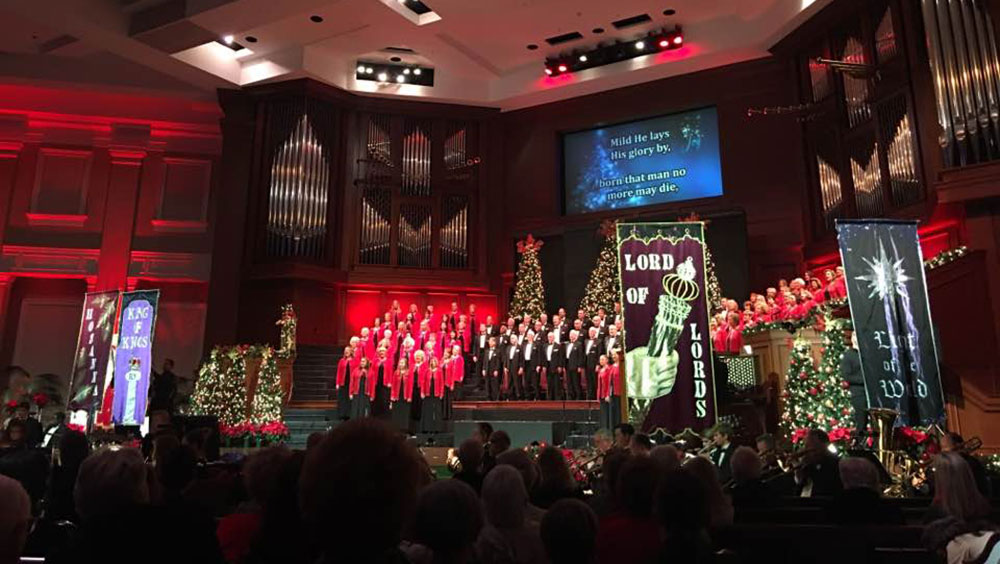 There really is no way to adequately articulate the full measure of emotion I experienced this past weekend, at both presentations of Christmas at Johns Creek.

On one level, I was worshipfully transported to other worlds.
Apparently, I am not alone.

One of the most sincere encounters I had was with a guest immediately after Sunday’s performance. She was my elder by many years, perhaps in her late 80’s or older. When Glenn dismissed the crowd, she remained. Steadying herself by the pew back before her, she simply stood. Weeping. I moved toward her, and she (slowly) toward me. Reaching out, I silently placed both of my hands on her arms. Tears streaming down her cheeks, she quivered out these words:

“For two hours…I’ve been in heaven.”

I believe she had.
Who knows what company she kept for those two hours,
and with what friends and loved ones long gone?

One thing is for sure. For this precious woman, the promise of Hebrews 12 had never been more real. At least for two hours on Sunday afternoon, she was “…surrounded by such a great cloud of witnesses.”

She was transported.
And so was I.

That moment only begins to scratch the surface.
Just 15 minutes prior to writing this blog, I was confronted by a woman and her daughter at Starbucks who described how moved they were by the worship experience. They are Catholic, and make it a point every year at Christmas to attend Christmas at Johns Creek and the Christmas Eve Service at JCBC.

We have a treasure in the worship ministry of Johns Creek Baptist Church.
I marvel when I consider the time and energy and passion that goes into productions such as these. Set design and construction. Drama casting, blocking, practicing. Musical scoring, memorizing, rehearsing, perfecting. Technical directing. Lighting. Audio-equalizing. And then, there is the throng of hosts to manage ticket traffic and hospitality.

There is nothing quite like an impassioned and empowered laity.
All who were responsible (in any major or minor way) for such a phenomenal weekend have blessed the Lord’s church in magnificent ways.
And I am so very grateful.

But here’s the real grace.
We, at JCBC benefit from that kind of musical excellence and leadership every week.

I said it Sunday, and it bears repeating here.
We are spoiled rotten!
And I love it!!

But, all of the remarkably multi-faceted moving parts would not be possible were it not for the leadership of one individual, our Worship Pastor, Glenn Crosthwait.
His relentless devotion to glorifying God in all things results in a level of excellence that inspires the very best.

Glenn, to you and all who serve and lead in our worship ministry, we say thank you for another mystifying weekend of worship.

Have I told you lately how much I love being your pastor?
Well, I do.